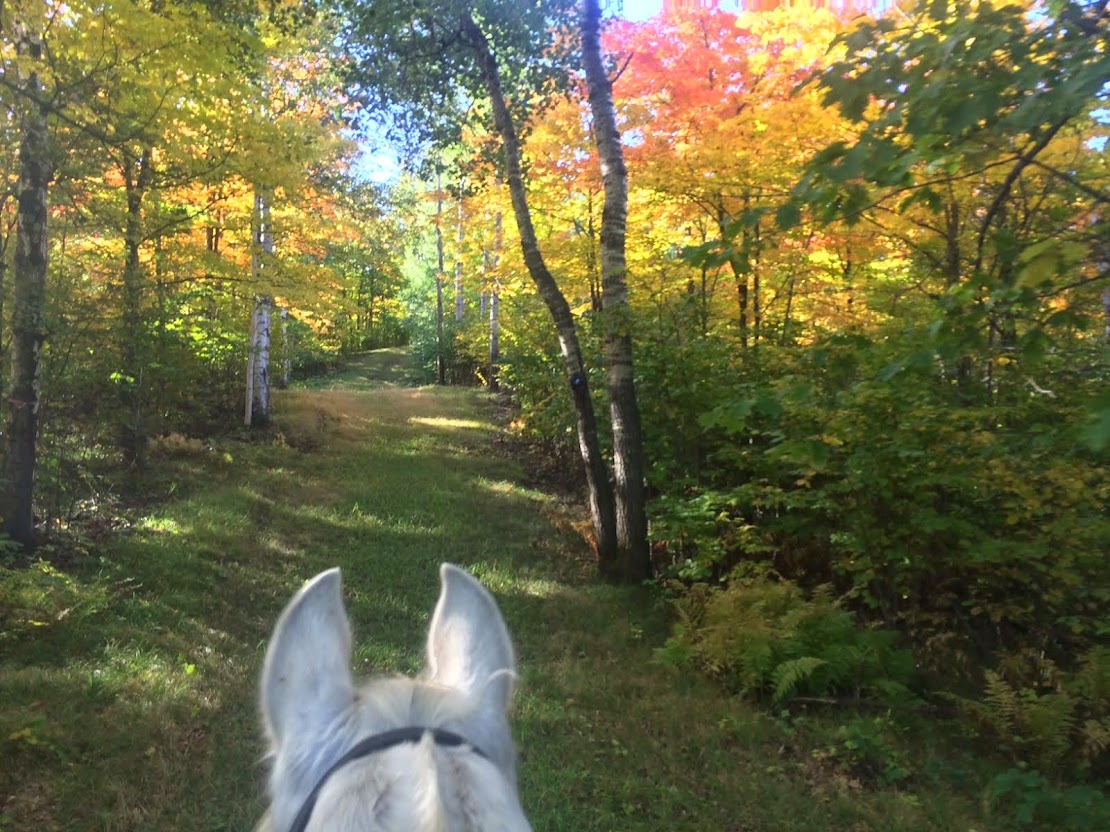 This post is later than I would have liked, because I wasn't sure what the whole story would be.  About three weeks ago, Rhio, my son, and I attended the Run for the Ridge distance ride in Minnesota. This was the same venue at which we attended our last ride and completed our 50 miler.  As a side note, I’ve been focused on Rhio attaining his first 1000 AERC Endurance miles (we are still 45 miles short) and I forgot that riders also accrue lifetime mileage separately from the horses they ride.  Since I did one 50 on Red, about 10 years ago, I have actually just received my 1000 mile patch!  It was a surprise when it showed up in the mail.  Now to finish Rhio’s 1000 – next year if the stars all align!

I’d agreed to vet the first day of the ride, so I set up camp right next to the vet check (for ease of dealing with a toddler while vetting and riding) and headed to the bar across the pasture we camp in with some riding friends.  My 21 month old was a hit at the bar, running around and smiling at everyone.  Which meant Mom got to enjoy her adult beverage and her friends’ company in short bursts of sitting down, while mostly following the toddler all over the place.


Saturday started early, with 100 mile riders heading out when it was still mostly dark.  It was a pretty wet morning, and we were all very happy to have a building with a large porch roof to be out of the rain while watching riders head out on their various distances, and working on the horses as they returned from their loops for their vet checks and holds.  The weather got better all day, my son went through multiple changes of clothes due to his favorite sport of puddle stomping, and the horses and riders all had smiles on their faces.  With the help of friends, I managed to work and be Mom all day without too much complaint from the toddler.  He really is a trooper, and I’m so lucky that “Grandpa John” attends rides with my good friend C. and loves to watch my son.  They had several adventures together with the stroller all over camp.

We had a lovely catered meal and awards in the evening, while both the 100 milers and the night LD riders were still on trail.  After a very full day of fun, fresh air, and minimal napping, my son went straight to sleep in the tent.  I used the time to get Rhio and I set up for morning, including putting his hoof boots on.  For all our years of competing together, the morning of the ride is a very anxious time for Rhio and it is difficult to get him to stand still for anything (grooming, tacking, mounting, and especially putting boots on). Add to that the distraction of an awake toddler while trying to get ready, and I knew I had to get as much done in the evening as I could.  Just like our last ride in August, Rhio was perfectly calm and perfectly behaved while camping the whole weekend, eating and drinking like mad.  With a sample size of only 2 - the August ride and now this ride - I really can't say with any certainty, but it seems that he is much more "chill" since I started using the new probiotic.  He is only getting it for a few days leading up to the ride and at the ride. But it is the only thing that I have changed, and he and I have been doing this together since 2007.  Maybe his age (19) has finally settled him, but it sure seems like that's not it.  There has been some research lately (in humans) about the connection between gut health and mental health, so there may actually be some evidence based science to back this up.  It is interesting, that's for sure!  And it has made my rides absolutely 100% wonderful.

The final night limited distance riders finished up around 10:30 pm, and I headed to bed at that point.  One of the other vets was the lucky one to monitor the last of the 100 milers, who finished in the wee hours of the morning.  It was officially time for me to exchange my vet hat for my riding helmet!  Luckily I managed a good night of sleep, despite the fact that I'd forgotten my sleeping pad and had only a thick blanket and a sleeping bag to pad our sleeping space in the tent.  Toddlers don't notice that kind of thing, and he was sleeping soundly when I crawled in.  The sandy, soft ground meant I didn't mind too much, either.
Sunday dawned clear and beautiful, and I was so pleased with Rhio’s calm, cool, collected self.  That is not normal for him on a ride morning! I was able to tack up without him spinning around, and then mount up and walk about the whole camp for a full 30 minutes on a loose rein.  It was kind of amazing, really.  I'm sure it looked completely unremarkable from the outside, but inside I was hooting and hollering with excitement over his stellar behavior.


The first loop (15 miles) was awesome and went quickly; our group of 4 riders ended up riding in two pairs, so it was just C. and Phoenix along with us.  The trails were slightly different than what we rode in August, and the footing was better than expected given all the rain the day before.

The second loop (15 miles) was fabulous for the first 10 miles, but then Rhio started head bobbing significantly and suddenly. He was lame! I hopped off and removed his front boots, as I knew his left front boot was questionable even at the start, with a partially torn gaiter.  I couldn't see or feel any obvious reason for the lameness.  I remounted and we headed down the trail, and he was still not quite right, so I hopped off again and reset the saddle, as I’d noticed the pad had slid back slightly and maybe the saddle was putting a little too much point pressure on the left shoulder.  I got back on again, and he was much improved, though still not 100% perfect.  But he was more than willing to keep trotting down the trail, and was no longer obviously lame.  At the next water tank, I hopped off again to check everything and now removed his rear boots as well.  (He had had some slight rubs/pink skin under the gaiters after the first two loops of the 50 in August, I think due to sand build up under them.  So I just thought better safe than sorry, and pulled the boots.) We hit the 2 mile marker with exactly the right amount of time left to walk in to the finish. (We were riding in the Competitive division, where all entrants ride the course in the same allotted time and are scored based on their horses' fitness.)  Rhio was feeling great for the whole walk in and we finished right on time (a first for us! We have been over time slightly at the other rides we’ve done together this season.)

As soon as I hopped off at the timer, Rhio was clearly limping at the walk!  His left front had some significant heat, pain, and swelling in the area of the tendons on the lower leg.  Yikes!!!!  What the heck?!  How could he have been sound under saddle literally 30 seconds prior? Needless to say, I was freaking out.  We pulled our saddles and got ready for our pulse check, which he passed with flying colors.  Then it was time to have our vet check, and he was obviously lame for the vet as well. We were awarded our mileage, but did not get an official completion for the ride.  What a bummer!  I felt about as big as a flea, and totally sick to my stomach that I had hurt Rhio.
Ice, leg wraps, and rest for a couple hours post ride while I packed up, then some anti-inflammatory medication and we loaded up for the ride home.  It was a 4 hour haul, and I was pretty concerned that he had a significant tendon injury at this point.  I had my husband meet me at the barn with more ice so I could treat him again before bed.  The leg was no better, but also no worse, when I unwrapped it back at the barn.

Monday morning I went out first thing to ice and re-wrap the leg, and make him a small pen in the corner of the outdoor arena, so that he didn’t have to be stuck in the barn by himself. He seemed to be feeling fine, but the leg was still swollen (slightly improved) and he was still lame at the walk (also moderately improved).  I then called the local equine clinic to get an appointment for an ultrasound.

The rest of the week, he was stalled at night and in his little pen during the day.  I cold hosed and/or iced the leg every day, wrapped with poultice, and worried.  By Wednesday, the swelling was all gone and he was sound at the walk.  By Friday, the day of his ultrasound, he was really sick of his small pen and his leg looked completely normal.

The ultrasound was all clear!  There was no damage at all to any of the tendons or ligaments in the lower leg. The blood vessels were enlarged, indicative of recent inflammation in the area, but there was no sign of injury, nor any indication what could have caused such an acute and siginifcant lameness without any external signs or any damage.  He was also sound when we trotted him.

So now Rhio is on 2 weeks of turn out  (I’ve been gone for vacation for a week, and now I’m off on a 5 day work trip) and I will do a quick ride next week to make sure everything is good.  If so, we’re headed to the last ride of the season Oct 17 – 19!

As a side note, they had a scale and I was able to weigh him – 880 lbs!  Interestingly, that is exactly what the weight tape measured just a few weeks prior, the last time I checked him.

To everyone who has had a sudden injury to their horse, I feel for you.  This was the first time Rhio hasn’t finished a ride in his entire career.  The worry I felt, and the guilt at having continued riding, possibly worsening his injury, was intense.  I am so relieved to say that everything is, amazingly, fine!

So, what happened?  I will never know for sure.  My only two theories are that either he banged the back of his front leg with his hind hoof (although there was no dirt or scuff on his leg that would make me think so) or perhaps he was stung in the leg by a wasp? Having recently suffered a sting myself, I know that they cause intesnse swelling and pain but resolve quickly.  I would have thought he’d react to being stung and I’d have had some indication that it’d happened.  But, who knows?

Posted by Trotting Down the Trail at 9:24 PM 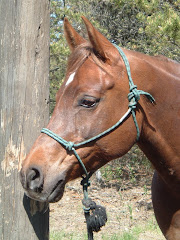 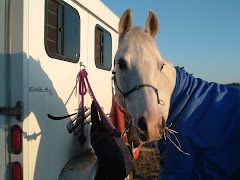